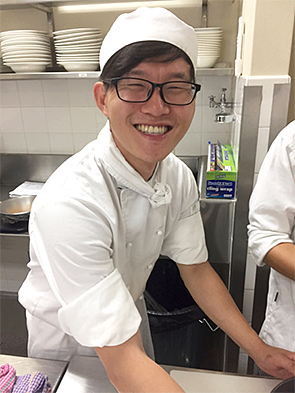 ​Seongjun Yun is a currently studying Certificate 3 in Commercial Cookery at the International College of Advanced Education (ICAE).

Seongjun is from South Korea. The first time he visited Australia was 2 years ago on a Working Holiday Visa and that experience led him to decide to study in Australia. It is his first time in Darwin City and the only difference he notices from his home country is the climate. In South Korea he is used to having four seasons but in Darwin there are only two which is wet and dry (and tropical).

He loves Darwin and willingly embraces the differences as he is such a keen explorer of the outdoors. One of his favourite activities is to regularly jog along Darwin beaches.

He chose ICAE as his school because he learned that ICAE had a mandatory Industry Placement (internship). He is keen to learn new things and had never worked in the Hospitality Industry prior to studying with ICAE. He is now working at Char Restaurant, a very upmarket steakhouse with a big courtyard, specialising in select grilled meats and modern Australian food. They offer intimate dinners or specially designed functions and Char is very popular in delivering a unique dining experience in NT.

He mentioned that the most enjoyable part of working in the hospitality industry is that you get to see how people enjoy the food and experience. He thinks that the Industry Placement is his favorite part of the course.

The only thing he misses back home is Korean dishes which is why in the future he would like to open a Korean restaurant.

Seongjun is very happy with his experience at ICAE. He has gained international friends from Brazil, Italy, Thailand and many other countries. One of his favourite things to do is to have a BBQ near the beach, whilst watching the ocean – something very unusual compared to life in South Korea!